Ryan McGonigle
1012 Sports is a nonprofit organization that uses sports to create job training and discipleship opportunities that will help teenagers in West Baltimore pursue God’s calling for their lives.

We host high-quality flag football and basketball leagues to engage with and serve youth in West Baltimore. Our participants are teenage males (ages 13-18 years old), 80% of whom reside in the historically marginalized 21217 and 21223 zip codes; these neighborhoods regularly rank for the city’s highest rates of poverty, diabetes, and high school dropouts. In addition to our sports leagues, 10:12 offers workforce development programs, weekly mentorship with volunteer coaches, and safe communities in neighborhoods that have historically been neglected with resources. 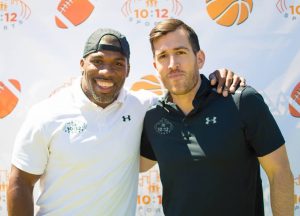 Testimony from 1012 Sports Founder, Jeff Thompson:
“Throughout my life, I can attest to God being a pursuer. I grew up in a rural area of Virginia.  In my area, the center of anything spiritual was the local church.  Outside of the church, there weren’t many activities which would be explicitly Christ focused.  So my friends and I went to our respective churches.  Some led by grandparents, some by parents, but we all had the pressure to show up to the building on Sundays.  It was more of a formality, which showed as we all were of the understanding that we just needed to go through the motions.  Though I had two God-fearing parents, my friends and I were like many youth of the area, attending church but not serious about the things of God.  So we all made our way down the alter to get our “get out of hell free card”, but The Lord never had our hearts.

One of the biggest things standing in the way of my friends and I were our perceived morality.  Being athletes that were respectful, didn’t smoke, didn’t drink, made us think that we were “ahead” of the rest and “not as bad”.  It wasn’t until I got to college and played football for University of Delaware, that God began to tear down my idols, so that He could be raised to the throne in my life.  A rough collegiate football career, riddled with nights filled with alcohol, women and excessive partying had me questioning if there was more to life than this.  As I asked that question, The Lord turned up the heat as far as the visible ways in which He was pursuing me.  Through a crazy set of events: my brother who was the “rebel” in the family, was saved at his college in Atlanta, I was roomed with one of the most outspoken Christians on away trips in our college football season (different positions hardly ever room together), and the team captain (also a strong believer) ended up moving into a house with us, randomly at the last minute.  This team captain decided to invite the Christian athlete group to meet at our house also.  Because he was massive and he wanted them to meet there, I felt myself not objecting.

Through the love of other believers, who loved on me when I came upstairs to partake in some of their group snacks, to the consistency of them walking in faith, I was led to attend a ski retreat weekend.  During that weekend, the question was asked “what is stopping you from giving your all to Jesus”.  I knew that it was women, and therefore told God “I don’t want to give up sleeping around but I know that I need to come to you.” That night I gave my life to Christ, and my life hasn’t been the same since.

That was in 05′ and in 06′ I got a chance to spend a summer in North Philadelphia exploring God’s heart for poverty, injustice, and “the least of these”.  During that summer, the Lord called me to “Urban Ministry” which led me to Wilmington Delaware, then to Baltimore.  Here, through listening to the community, and seeking to love in a practical way, the Lord has led me to start 10:12 Sports in 2016.  It has been a beautiful journey that is tough the majority of the time, but well worth the fight.  I’m learning so much about God in this journey and see him transforming others for His glory, and it’s exciting!”